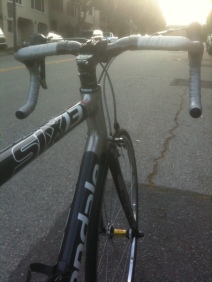 The new cycling year is off and pedaling!  After a flat finish to 2011– literally, two rarely seen flat tires brought a quick end to my final ride– today kicked off my first spin of 2012.  I tell you, there’s nothing like a good 30 miles of hammering to get the year rolling.

As I mentioned on December 31, I did manage in 2011 to surpass by a hair my cycling mileage of 2010, not that either number is at all impressive.  In fact, both are just a little more than one-third my annual record, not to mention about a thousand miles less than my yearly average throughout the last decade.

Now after one ride, my mileage is up compared to this time last year.  Perhaps I’ll be “on a roll” in 2012, not that good road cycling is solely about distance.  Of course it’s distance– plus speed!

So here’s to my first 30 miles of the year.  Now where are those first-of-the-season races?

Posted by Ryan on January 4, 2012 in Cycling, Daily Activities