RSS
← Going Anywhere
All Your Own → 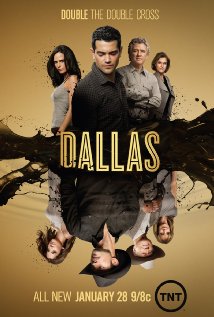 Who’d have thought two or three decades ago that we’d be watching a brand new episode in January 2013?  Then, who’d have thought such an event would be happening after the death of the show’s iconic star and irreplaceable centerpiece?

Season two of “Dallas” is off and running.  Of course Larry Hagman passed away last November, midway through production of this second round of new episodes.  As such tonight’s premiere is bittersweet.  We get to see a severely aging J.R. a few more final times, knowing there’s no negotiation on his departure.

As the latest storylines rapidly spin beyond the point of even remote belief, and as we dare not blink in keeping up with exactly who’s one-upping who among the entire corrupt lot, the biggest question will certainly keep all true “Dallas” fans tuned in over the course of the next few weeks:  Just how exactly will J.R. exit?

Blink I did not, as in paying close attention to the series of quick frames during the closing credits, my eye caught precisely what was placed there to be found.  Apparently we’ll be seeing some more “old” faces this season.  J.R.’s swan song, which began tonight, looks like it will grow into a well-attended event.  While I could have waited, now under the circumstsances I can’t wait.

His Latest Entrance Before His Final Exit

← Going Anywhere
All Your Own →