Retaking His Place, The Chapter Closes.

It all comes down to Paris, and then it’s over.  A fourth stage win for Greipel, Sagan in green a fourth straight year sans stage win this time, and Quintana in white on the second place podium, altogether behind the first British two-time champion, bring to an end a three-week, 2088-mile journey for 160 of the starting 198 riders to reach stage 21 on the Champs-Elysées. 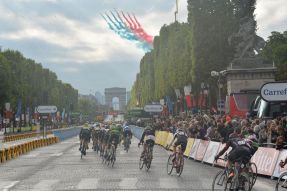 What was probable becomes certain.  Chris Froome is the man– in not only yellow but also polka dots.  With this, as 2013’s winner retakes his place two years later, the 102nd Tour de France takes its place in history.  And so we close the latest chapter of professional cycling excellence.