A British One-Two into Paris

Twenty days of racing complete, 153 competitors still in the game, and but one stage remaining– this of course tomorrow’s grand finale.  The third week of Le Tour de France has magnificently come and gone, leaving behind yet one more batch of remarkable accomplishments and impressive finishes. 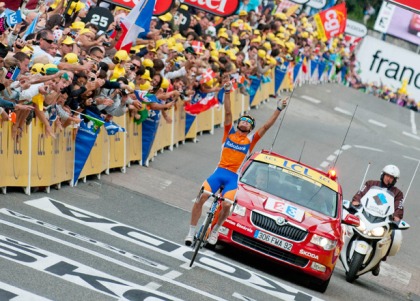 And now it’s on to Paris, for the Tour’s big finish on the Champs Elysees.  Considering the men in first and second place overall are both riding for Great Britain– Bradley Wiggins and Chris Froome respectively– it’s a “British One-Two” as Tour commentators put it.  Then, if “The Missile” Mark Cavendish from The Isle of Man wins tomorrow’s final stage once again, perhaps it will be called a British One-Two-Plus.  We’ll see!