The biggest headline of the 2017 Tour de France thus far is not a happy one. In what many people, including myself, consider an overly harsh and undeserved decision, Peter Sagan has been ejected from the race. At the same time, Mark Cavendish is injured and out.

Barely halfway through the first week, two of cycling’s biggest names– my two favorite riders in fact– are gone. Suffice to say this Tour will not be the same, but as always it goes on without hesitation. Like it or not, the harsh reality of professional cycling prevails.

Off to Memorable Starts… 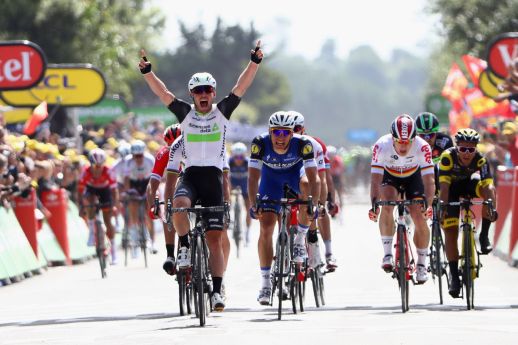 The day after stage 1 puts yellow on the back of Mark Cavendish, a brilliant stage 2 finish transfers that yellow onto Peter Sagan.  For the former this marks his 27th career TDF stage win, while the latter finally enjoys his first such TDF victory du jour since 2013. Plus, both have now worn le maillot jaune for their first times in any Tour de France! 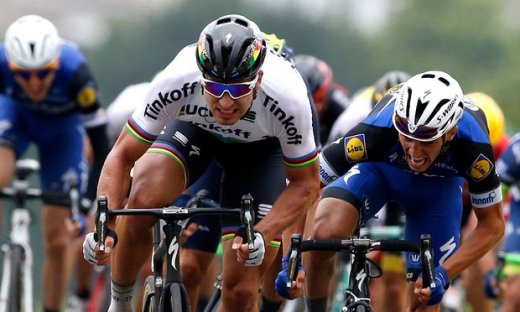 Then comes stage 3, and a second, photo-finish win for Cavendish! This brings him to 28 total TDF stage wins, surpassed only by the legendary Eddy Merckx.  Meanwhile, Sagan gets to enjoy yellow for at least another day across relatively flat central France. 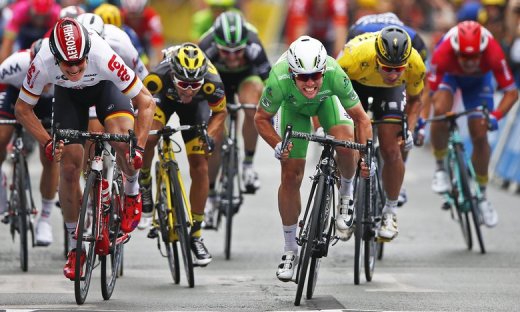 Altogether, my two favorites are off to memorable starts.  Three down, 18 to go.  Vive Le Tour!  And Happy 4th of July to the mere five competing Americans!

Highs & Lows: One Week in the Books 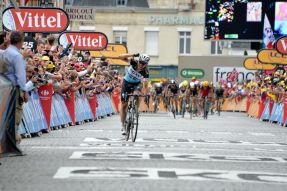 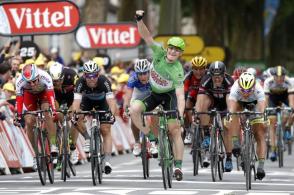 His risky solo breakaway proves awesomely successful, winning Tony Martin stage 4 and putting him in yellow.  The German “Gorilla” throws the hammer down once again in the final meters of stage 5, Greipel’s second win for a second time eclipsing a Cavendish stage victory.  Bad luck repeats itself for le maillot jaune, as a crash in the last moments of stage 6 sees Martin across the line with a broken collarbone.  And in the next big sprint finish of stage 7, amid anticipation of dominance or payback, the latter ultimately prevails.  The “Missile” triumphantly kills the pressure and wins his first stage of this year’s Tour! 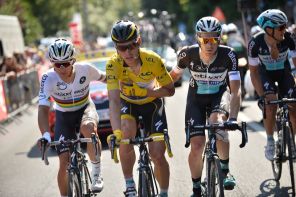 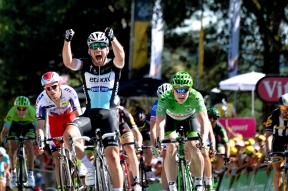 Thrilling highs alternate with shattering lows, again and again in that unpredictable and unforgiving pattern that defines bicycle racing.  One week of the 2015 Tour de France is now in the books, with the harsh-yet-glorious reminder that anything we might anticipate will always meet the unforeseen.  This said, onward they go to the inevitable highs and lows that come next. 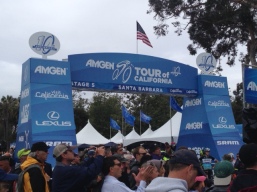 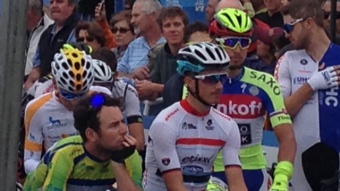 Stage 5 of the 2015 Amgen Tour of California rolled out of Santa Barbara on Thursday, just after I was able to snag my own photo of my two favorite rival sprinters, Mark Cavendish and Peter Sagan.  As some very atypical wet weather soaked the 95-mile course and made for a soggy finish, like most other fans I was left to wonder which of the two powerhouses would win the day.  The answer, of course, for his third stage victory of this tour:  The Missile! 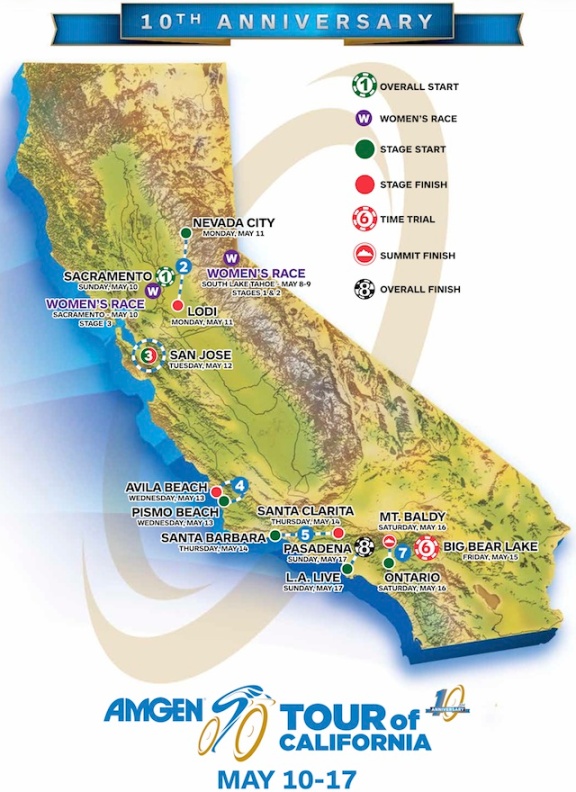 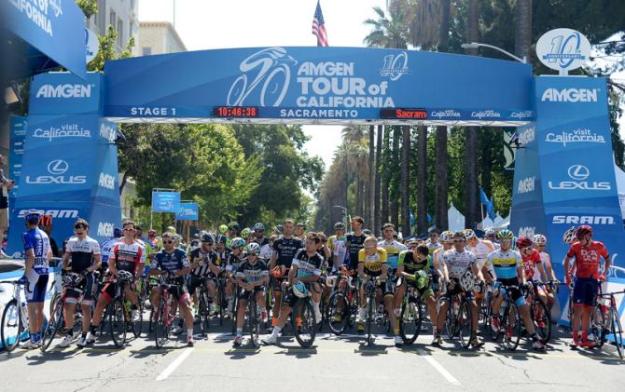 The 2015 Amgen Tour of California is off and rolling as of today. The week-long professional cycling race departs from Santa Barbara on Thursday! (Getty Images Sport)

Stage One: Fanfare to Disaster 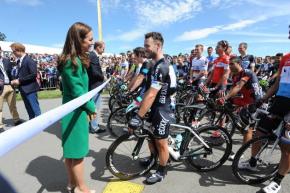 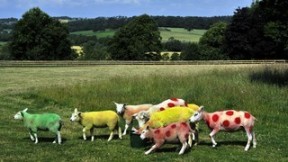 From a royal send-off to fittingly colorful sheep, the big first day got underway with full fanfare in the English city of Leeds, followed later in the day by polka dot victory for this year’s oldest rider.  Then, as instantaneously as everything can change in cycling, stage 1 did not end as hoped for the day’s largely anticipated winner.  Not only did the region’s star competitor lose the day– but rather, complete disaster prevailed.  With the rare chance to capture yellow in a sprint finish on not just his native soil but his mother’s hometown of Harrogate– before the eyes of William, Kate, Harry, Prime Minister Cameron and thousands of supporters, not to assume any pressure of course– shockingly, painfully, and in a cycling instant, it did not happen.

The 101st Tour de France appears likely to resume with one less rider at the start of stage two in York, a huge loss indeed to the next 20 days of racing.  Sadly enough to say, for as “royally” as his day began, his crash on finish line approach looks like a pretty bad one for Mark Cavendish.

Bookends, Among All Else. 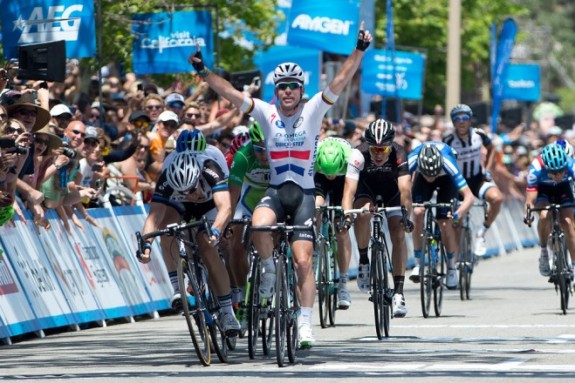 “The Missile” bookends the 2014 Amgen Tour of California. (Photo: www.cbgphoto.com)

As usual, the word-wise Phil Liggett phrased it appropriately.  For the Missile’s victories in the first and last stages of this year’s Amgen Tour of California, the past week has been nicely held together by “Cavendish bookends,” much to Peter Sagan’s disappointment no doubt after clearly gunning for two in a row to wrap up the event.  In the end, with Sir Bradley Wiggins’ overall victory and Mark Cavendish’s comeback performance, it’s plain to see British legs rule California roads.  I myself am thrilled to have been right there, live at the final finish line in Thousand Oaks, even as the peloton flew by faster than most our heads can turn! 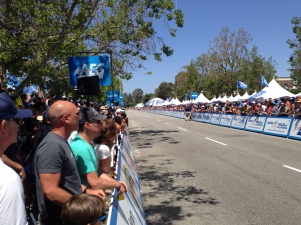 They’ll be coming, and quickly! 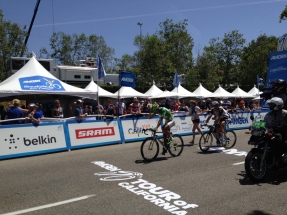 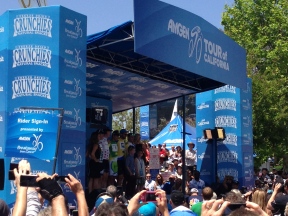 All the winners are on the podium.

Posted by Ryan on May 18, 2014 in Current Events, Cycling, Famous People, News