From my first ride on my brand-new Giant TCR road bike, on March 1, to my most recent spin today, I’ve closed out my first month on my bright new ride at a very modest 462 miles.  The thrill remains just as strong today as one month ago, as I look forward to thousands of miles ahead!

Posted by Ryan on March 31, 2017 in Cycling, Daily Activities

On The Eve, Encore! 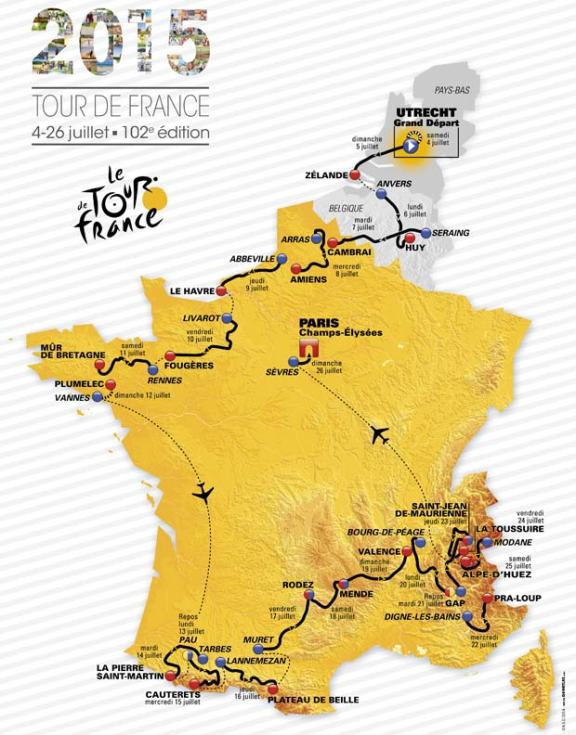 And now once again, for the 102nd time in fact, the long-anticipated eve has come. The 2015 Tour de France is ready to roll tomorrow, with new technology to boot!

Stage 5 of the 2015 Amgen Tour of California rolled out of Santa Barbara on Thursday, just after I was able to snag my own photo of my two favorite rival sprinters, Mark Cavendish and Peter Sagan.  As some very atypical wet weather soaked the 95-mile course and made for a soggy finish, like most other fans I was left to wonder which of the two powerhouses would win the day.  The answer, of course, for his third stage victory of this tour:  The Missile!

Talk about defying sporting convention.  One week ago– Sunday, September 15– marked an unforgettable moment in cycling history (fingers crossed).  And then we waited, more or less along these lines:

The protocol looks something like this: Win a race, get kisses from the podium girls, shake hands with the Badger, and then wait for journalists to question the legitimacy of your performance.  (VeloNews, 9/16/13).

Fortunately, aside from the “drug testing mix-up” that was quickly deemed no fault of his own, there’s been very little if any rumbling throughout the week about “legitimacy” in this case.  As such it looks like we really can commend a remarkable accomplishment for what it is, even in a sport that at this point in time cannot be trusted, sadly yet understandably enough.

Those who see an age limit on athletic victory will probably want to reconsider their outlook.  One week on, the headline can now be repeated with all the more confidence:  41-year-old American Chris Horner— close to 42 no less– has won the 2013 Vuelta a Espana.  Not only is he the first American in history to capture Spain’s annual three-week cycling race, but the Oregon resident has also become by far the oldest rider ever to win one of cycling’s three Grand Tours– the other two of course Le Tour de France and Giro d’Italia.

Along with victory comes the defense, as expected. Assuming no doping in today’s supposedly “cleaner” era of cycling, which even after a week we must still believe on faith without proof, this unlikely victory a month shy of the winner’s 42nd birthday is just plain awesome!  Chris Homer stands a true inspiration to all competitive cyclists who, both mentally and physically, are never too old!  Thank you “Grandpa.”

And Now, A Day or Two of Rest.

Happily recalling my “big” cycling streak of 2008, that summer I proudly pedaled 50 consecutive days.  Now in the summer of 2013 I’ve surprisingly yet gladly surpassed that number, marking a grand total of 65 straight days in the saddle.  From June 29 through September 1, my never-complaining legs propelled me 1625 miles altogether, for a modest yet perfect average of 25 miles per day.  With this “average” accomplishment I now rest for a day– or two, or three– before resuming in pursuit of my yet-to-be-set distance goal of the year.

Five years older, apparently I’ve fallen into shorter rides overall, reflected in the lower daily average without any longer single days.  Altogether, now with some extra pounds on me, plus an aging machine, a few mechanical setbacks, and those ever-present daily time limitations, I’m thankful to be keeping myself in relatively decent cycling shape while a return to competition remains my goal, other factors permitting.

Meanwhile, when I refer to my stats “matching up perfectly with the months,” this is to say my end-of-month distances have been hitting milestone numbers, while my average has increased proportionately.  Neatly enough, on May 31 I totaled 2000 miles for the year, at a 400 mile-per-month average.  Then on August 31 my year-to-date total hit 4000 miles– notably sooner than last year— for an overall monthly average of 500.

In any event, I’m getting there– wherever “there” is!  It’s all relative– that is, what seems like a lot to a novice is nothing to a pro, while I remain somewhere in between.  And as I’ve said I say once more:  It’s now time for a short rest.  I’ll catch you back out there very soon, unless you more likely catch me first! 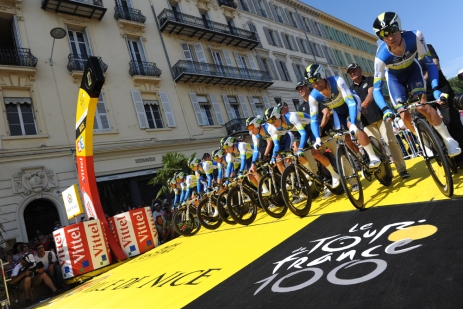 Stage 4’s team time trial burned up the streets through one famous French southern coastal city, on this day covering the shortest distance in the entire Tour de France– a mere 25 kilometers to be exact, flat and fast!  And for Team Orica-GreenEdge, Nice proved all the nicer!

Fourteen stages completed in France.  For me, fifteen rides around the Bay Area accomplished.  I must say, Le Tour has been quite a terrific source of motivation to get me cycling on a daily basis once again.  Today marks my 15th consecutive day out on the road, sometimes in a group but largely on my own.

After 335.6 miles over the past 15 days, for a modest daily average of 22.37 miles, my latest “mini tour” hasn’t been so much about the actual distance covered in one day, but more about my average speed and overall workout.  Most of all, I’ve readily welcomed the renewed self-discipline of being back in the saddle everyday.

Unfortunately I’m approaching the imminent need for a new crank set.  Alas, it’s doubtful my current streak will reach the 50 consecutive days I hammered out in 2008.  Oh well… there’s always my next “tour.”

Posted by Ryan on July 16, 2011 in Cycling, Daily Activities

Every July, transfixed in front of my television, I see more French countryside than most vacationers probably ever do, that is when my eyes happen to drift from the peloton.

The 2011 Tour de France is here!  Suffice to say, my free time is taken for the next three weeks.  Je l’aime!

“31” replaces yesterday’s question mark.  As the number of miles cycled in the course of two hours on another sunny, albeit cooler and windier, afternoon, the mostly flat and fast jaunt to Tiberon proved itself time well spent.  Included in the relatively brief spin was even a quick moment for some creative photography. 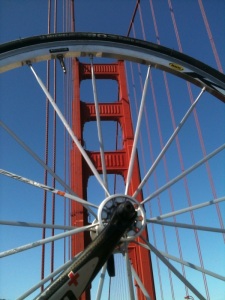 For all this recent talk of numbers, it’s not always about the number, at least as far as distance itself is concerned.  There IS always cadence, ascent, descent, time and average speed to consider.  After all, a hard and attacking 20 miles certainly beats a relaxed and steady 50 miles most any day.

Today came the number 25, in 90 minutes, as this rather unpredictable sequence continues.  But again, it’s really not the number of miles that most matters.  The number of minutes, for better or worse, usually has more to say.

And that’s my well-cycled opinion.

Earlier this month, I wrote that a day excursion north of San Francisco to the Point Reyes vicinity is an excellent undertaking by motorcycle.  I’m here now to say the same trip works just as well, and in terms of calorie burning even better, by bicycle.

There’s practically no vehicle traffic whatsoever out on the country roads near the little towns of Marshall and Point Reyes Station.  For most of the time, cyclists have the road to themselves, much more so than on the popularly pedaled roads around Woodside.  The pavement up north is typically iffy in a few spots, but thankfully enough most of it is relatively new and smooth, especially along the stretch of Hwy 1 along Tomales Bay known as Shoreline Hwy. 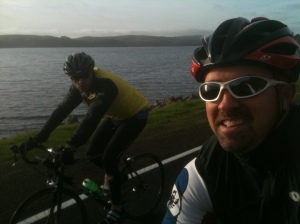 Just as I highly recommend the area for a rewarding motorcycle outing, the same goes for a morning, and afternoon, or an entire day, of cycling.  It sure beats stop-and-go city riding, as long as you don’t mind the car trip to get there.  I’ll be back up there soon sans motor, as there’s much more open road to cover.  Our loop yesterday was a mere 35 miles.  Next time we’ll double this!

Posted by Ryan on December 28, 2010 in Cycling, Daily Activities, Reviews