And Now, A Day or Two of Rest.

Happily recalling my “big” cycling streak of 2008, that summer I proudly pedaled 50 consecutive days.  Now in the summer of 2013 I’ve surprisingly yet gladly surpassed that number, marking a grand total of 65 straight days in the saddle.  From June 29 through September 1, my never-complaining legs propelled me 1625 miles altogether, for a modest yet perfect average of 25 miles per day.  With this “average” accomplishment I now rest for a day– or two, or three– before resuming in pursuit of my yet-to-be-set distance goal of the year.

Five years older, apparently I’ve fallen into shorter rides overall, reflected in the lower daily average without any longer single days.  Altogether, now with some extra pounds on me, plus an aging machine, a few mechanical setbacks, and those ever-present daily time limitations, I’m thankful to be keeping myself in relatively decent cycling shape while a return to competition remains my goal, other factors permitting.

Meanwhile, when I refer to my stats “matching up perfectly with the months,” this is to say my end-of-month distances have been hitting milestone numbers, while my average has increased proportionately.  Neatly enough, on May 31 I totaled 2000 miles for the year, at a 400 mile-per-month average.  Then on August 31 my year-to-date total hit 4000 miles– notably sooner than last year— for an overall monthly average of 500. 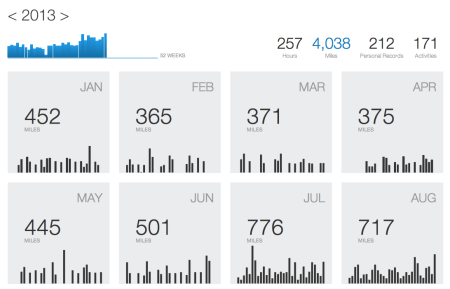 In any event, I’m getting there– wherever “there” is!  It’s all relative– that is, what seems like a lot to a novice is nothing to a pro, while I remain somewhere in between.  And as I’ve said I say once more:  It’s now time for a short rest.  I’ll catch you back out there very soon, unless you more likely catch me first!