RSS
← When It’s July In France…
Rare Yet Powerful Moments →

Commentator Phil Liggett often reminded viewers throughout the past three weeks that there’s no shame in finishing last in Le Tour de France. Of course, surviving 21 stages to finish in Paris is always a feat for any rider. This year’s last-place finisher in particular has shown himself to be the most respected recipient of the “lanterne rouge” in recent cycling history. 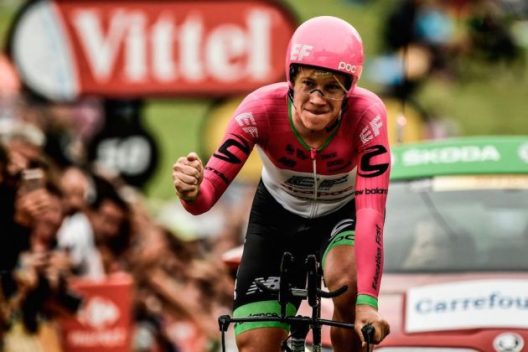 Only five Americans competed in this year’s Tour de France out of 176 riders to start. The U.S. needed to make its mark on Le Tour once again, and, well… it happened. While the amazing Peter Sagan took three stages and survived a third-week crash to finish with his sixth green jersey, Philippe Gilbert climbed back up the wall over which he flew to complete the day with a broken kneecap, and the consistent-yet-cracking Chris Froome squeaked his way onto the final podium alongside his maillot jaune-winning teammate Geraint Thomas, the most impressive display of sportsmanship in my opinion, and that of many, came from this year’s holder of that lanterne rouge. My hat– or rather, my helmet– is off to Lawson Craddock, not only the first American in Tour de France history to earn this final designation, but also an inspiring fighter in the face of overwhelming physical, mental and emotional challenge.

At last, three typically grueling yet glorious weeks have seen their end.  At last, it’s a very special viewpoint. And at last, good can come. C’est Le Tour, encore!

← When It’s July In France…
Rare Yet Powerful Moments →