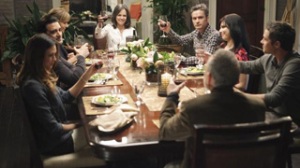 The infamous dining room served as a nucleus of the show for five years, loudly so.

I’m sorry to see them go.  At the same time, I’m not all that surprised.  As storylines grew increasingly silly and often confused, key cast members dropped off while others appeared inconsistently.  For the past year it’s been clear to both me and many others that the show was on the decline.  How many more deep-seated family secrets could possibly be revealed?  And how many more times could one’s paternity be questioned?  By the season-ending episode one week ago, it seemed all the clearer that the Walkers have run their course.

Still, I would like to have seen where the Walkers went next, as this last season did turn out at least a few stronger moments.  However, perhaps herein lies the problem:  There may very well be no where more for them to go, at least not without further redundancy and ridiculousness.  Five seasons and more than 100 episodes is an impressive run in television these days, while some famous programs in history have no doubt stayed around TOO long.  This said, perhaps it’s better we’re saying farewell to the Walker clan before they’re completely ignored and forgotten.

Farewell, Walkers.  For better or worse, you clearly brought a unique and distinct style to prime-time television that will be missed.

And that’s my faithful-viewer opinion.