In advance of this Sunday’s annual round of pricey TV spots, I like many have seen the so-called “controversial” GoDaddy Super Bowl commercial that– thanks to the typical set of complainers– will not be aired in its original, expensively scheduled time slot. First, join me if you will in a big eye roll. Then, let me say I echo the well-reasoned sentiments of Brett Baker:  It’s fine. 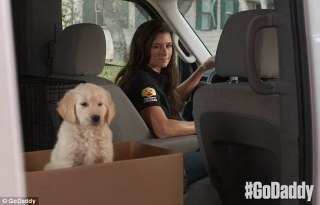 But it’s gone, unfortunately.  So let’s take this entire illogical mess a step further, as you too might appreciate the clever reasoning of Alexandra Petri.  She certainly raises a few great points to make her point, begging the question:  How much more ridiculous does the whole matter have to get?  Or better yet, why was this ever an issue in the first place? At least GoDaddy is getting an excellent publicity return on its $4 million investment! (Click image to watch the :30 ad.)

Posted by Ryan on January 30, 2015 in And That's My Opinion, Current Events, Media, News

This special evening seems like a lifetime ago.  Compared to the length of her very, very long life however, it was merely yesterday.  Needless to say, I’m honored to have enjoyed this uniquely memorable friendship in her final years.  Plus, how nice it is that our impromptu camera appearance has been up on YouTube almost since it was recorded.  Happy Birthday Greta!

For The Fan of Fans…

The first time I watched this “behind-the-scenes” montage, late in 1987 I believe, it was a private piece for which you needed a connection to know it existed– which fortunately at the time I happened to have.  Now all these years later, available online to the public, it’s just as funny.  If you too are a “Knots Landing” fan and have never seen this, you’ll certainly appreciate it!

Even Funnier Than The Hosts… 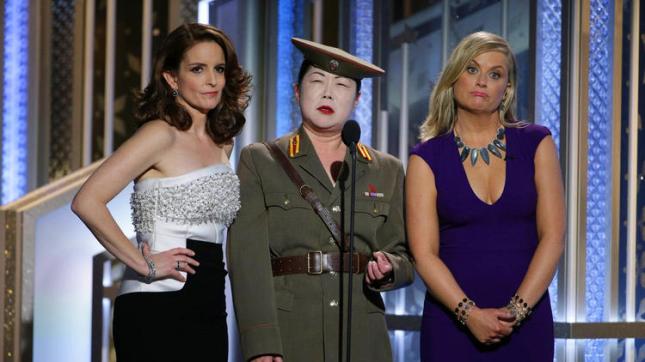 Seemingly a touch less energetic than last year, the Tina-Amy duo nevertheless worked well yet again. A certain someone however came between them, proving even funnier!  (Photo:  Paul Drinkwater/NBC)

Posted by Ryan on January 12, 2015 in And That's My Opinion, Famous People, Humor, Media

The greatest number of miles I’ve ever cycled in a calendar year came in 2014– the same year I of course turned “4-oh”– surpassing my 2008 by a mere 84 miles.  For a variety of non-physical reasons, while my cycling will certainly continue, I don’t see beating 6353, not this year at least.

Posted by Ryan on January 3, 2015 in Daily Activities

The auspicious “first meal” that began for us three years ago made a comeback once again in our Southern-influenced home to kick off 2015.  Now let’s see how these three desirable elements pan out this time around. 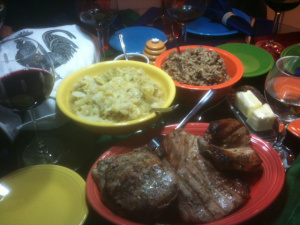 What better way to kick off the new year than by eating?!

According to Southern tradition, so I’m told, the first big meal of the year carries quite a bit of meaning.  As such, in my home tonight, thanks to the well-planned preparations of two Southern gentlemen, the lineup consists of pork for prosperity, cabbage for wealth, and black-eyed peas for good luck.

The meanings were explained to me and seem to make decent sense.  See for yourself if you can figure them out.  Suffice to say, my first dinner of 2012 has been beyond satisfying.  I hope and rather doubt, however, that such copious consumption will be a nightly trend this year.  Happy New Year!

Posted by Ryan on January 1, 2015 in Daily Activities